Welcome to the Via Sacra. From Vienna to Mariazell. Austria's oldest pilgrimage.

In Lower Austria, where many roads lead to Mariazell, pilgrimage has a long tradition. Today a "modern" pilgrim enjoys to escape the stress of being at leisure on the road and to draw inspiration and new meaning in and of nature. Austrias' oldest pilgrim way is the Via Sacra, which runs from Vienna to Mariazell. Pilgrims can make a pilgrimage on two routes, the traditional Via Sacra and the Vienna pilgrim way 06 - it takes around four to five days to hike to Mariazell. 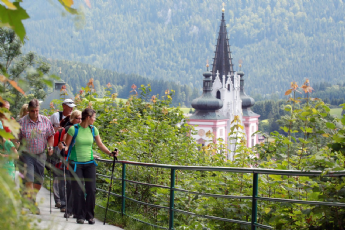 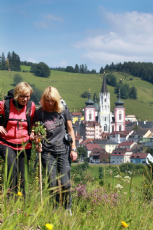 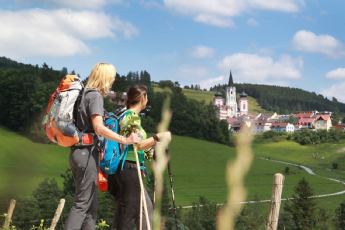 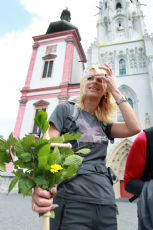 There is a long tradition in Lower Austria of pilgrimaging to Mariazell on the many trails that lead there, but today these pilgrimages are gaining a resurgence of interest not only along the Camino de Santiago. The “modern” pilgrim relishes escaping stress, unwinding, being inspired by nature and reflecting on the meaning of life. The oldest pilgrimage trail in Austria is the Via Sacra, which leads from Vienna to Mariazell. Together with the Vienna Pilgrimage Trail 06 the Via Sacra is experiencing a renaissance of interest.

Pilgrimaging along the ways of the Lord in majestic scenery

There are two principal trails from Vienna to the “Magna Mater Austriae” in Mariazell: the Via Sacra or The Vienna Pilgrimage Trail. Along the way the pilgrim is rewarded with majestic natural and cultivated landscapes belonging to some of the most beautiful in all of Austria. The trails cover a distance of 120 to 130 kilometers (75-80 miles) in areas away from large tourist destinations. Hikers will travel through countless locations with many cultural treasures until they reach the Mariazell Basilica after a four to five-day hike. Throughout the centuries many “pilgrimage routes” have formed from single paths and roads.

The most traditional of the Mariazell pilgrimage routes is the VIA SACRA, beginning in Vienna and traversing Hinterbrühl, Heiligenkreuz, Hafnerberg, Kaumberg, Hainfeld, Rohrbach, St. Veit, Lilienfeld, Türnitz, Annaberg, Joachimsberg, Josefsberg and Mitterbach on the way to Mariazell. There are numerous localities along the way that have profited from former flourishing pilgrimaging activity. The two religious centers are the monasteries Heiligenkreuz and Lilienfeld. Klein-Mariazell was also once among these centers but was closed down in the 18th century. It has since been revita- lized. The Via Sacra has been traveled for more than 800 years by pilgrims from both Vienna and from Slavic and Hungarian speaking areas. Not only humble pilgrims but also princes and emperors have tread on the route of the pilgrims and greatly enhanced its significance.

All details about the daily tour you'll find in the Via Sacra folder.

Special offer for you


Getting together. Laugh.
Big  adventures celebrate –
and  toast on comfortable Lifestyle.


Beautiful coffee or a
glas of styria Wine,
relaxed moments after
an eventful day.